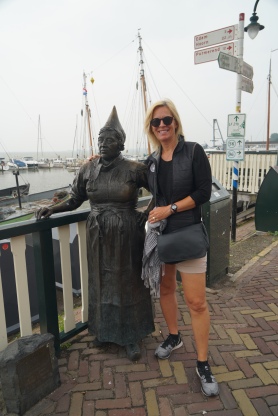 After the heat and sunny skies of Italy we have been treated to grey skies and rain in Holland. We dressed in traditional Dutch costumes and tasted cheese in the historic town of Volendam. Despite rain we visited the village of Marken and toured a wooden shoe “factory” where we saw traditional wooden shoes as well as many other styles including pink high heel wooden shoes. We listened to classical music in a stone arch passageway in Amsterdam- violins, accordion and trombone sounded like a full orchestra as notes of Handel’s Messiah soared around us. We admired Rembrandt’s Night Watch in the Rijk’s Museum then walked amid life size replicas of the characters of the painting at Rembrandt Plaza. Along with hundreds of others we rode bicycles along the city canals and through Vondel Park. After walking around for awhile we were thrilled we were able to find our bikes among thousands of others!
I have learned from travel that everywhere you go it becomes a part of you in some way – it is impossible to return the same person you were when you left😄

We are getting closer to home 😄 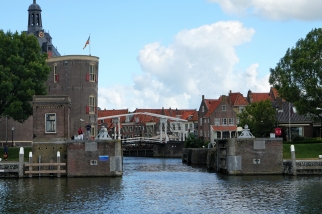